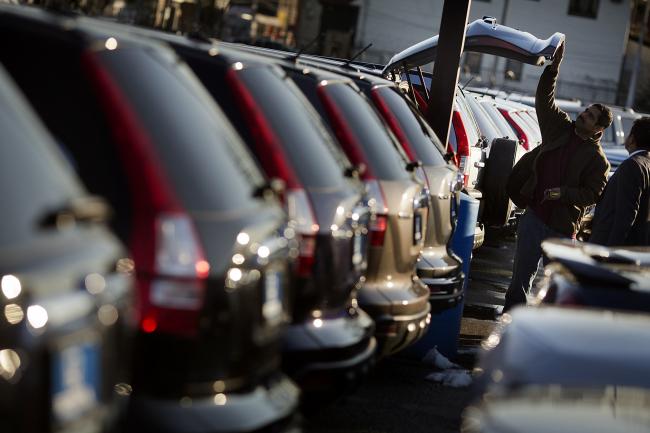 © Bloomberg. A customer looks in the trunk of a Honda Motor Co. vehicle displayed for sale at Paragon Honda dealership in the Queens borough of New York, U.S., on Friday, Nov. 9, 2012.

(Bloomberg) — U.S. unexpectedly declined in April for the second time in three months, weighed down by soft sales of autos and building materials and suggesting consumer spending will remain subdued this quarter.

The value of overall sales declined 0.2% after a 1.7% increase the prior month that was the strongest gain since 2017, according to Commerce Department figures released Wednesday. That compared with the median forecast in Bloomberg’s survey calling for a 0.2% rise.

Sales in the “control group” subset, which some analysts view as a cleaner gauge of underlying consumer demand, were unchanged from the prior month, below projections for a 0.3% gain. The measure excludes food services, car dealers, building-materials stores and gasoline stations.

The figures, also reflecting weakness in the category that includes online sales, suggest spending remains soft following the weakest quarterly increase in a year. That could bolster pressure from President Donald Trump and financial markets to cut borrowing costs amid unexpectedly low inflation, though Federal Reserve policy makers have pledged patience as steady job and income gains should support purchases in coming months.

Retailers may be poised to take a further hit should Trump follow through on his threat to impose tariffs of 25% on almost all remaining Chinese imports, which would likely force Americans to absorb higher prices. Unlike the previous targets of U.S. levies, the majority of this tranche is consumer goods.

The report showed seven of 13 major retail categories decreased, with other down sectors including clothing, health and personal care, and electronics and appliances. Categories with increases included general merchandise, food and beverage stores, and restaurants and bars.

Sales at automobile dealers fell 1.1%, the most since January, after increasing 3.2% in the previous month. Industry data from Wards Automotive Group previously showed unit sales retreated in April, touching the lowest level since 2017.

Filling-station receipts increased 1.8%, the report showed, as oil prices rallied. The figures aren’t adjusted for price changes, so higher retail sales in the category could reflect higher gasoline costs, sales, or both.