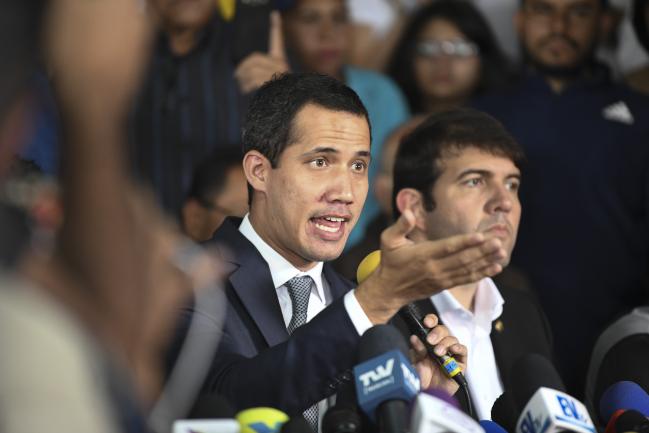 (Bloomberg) — The U.S. is unlikely to grant a request from the Venezuelan opposition for an executive order protecting the nation’s assets from creditors, according to people familiar with the matter.

That means National Assembly President Juan Guaido, who’s recognized as head of state by the U.S. and more than 50 countries, will need to make a critical bond payment by the end of this month to ensure that investors don’t try to seize Citgo. The Houston-based refining company, owned by state-run Petroleos de Venezuela, was put up as collateral on the note.

President Donald Trump wants to tread carefully and not get too involved in the opposition’s economic agenda, according to people familiar with the administration’s plans who requested anonymity to discuss internal deliberations. With Venezuela behind on more than $10 billion in bond payments, and struggling to keep up with loans from China and Russia, potential asset seizures by creditors are a looming issue as the U.S. seeks to help Guaido’s allies establish a new government and restore economic growth.

An ad-hoc PDVSA board appointed by the opposition-led legislature has said it will make the $71 million interest payment on PDVSA’s 2020 bonds, though it will be doing so “in protest” because it considers the debt illegitimate. Indeed, Guaido’s allies were seeking the asset-protection order to avoid having to transfer the money to investors.

Vecchio requested the order in a March letter to the National Security Council, saying it would allow the administration to focus on a peaceful transition of power and resolving a complex humanitarian emergency while avoiding the distraction “of costly, time-consuming enforcement litigation” in the U.S.

Vecchio recommended a measure similar to Executive Order 13303, which was deployed in Iraq after the 2003 invasion to prevent investors from seizing local assets.

The Trump administration probably wouldn’t take an asset protection order seriously until Nicolas Maduro leaves power, according to Cecely Hugh, investment counsel in emerging-market debt at Aberdeen Standard Investments in London. She expects Guaido’s team to come through with the PDVSA 2020 bond payment.

“It would make sense to keep control of Citgo,” she said. “I think their intention is to pay.”