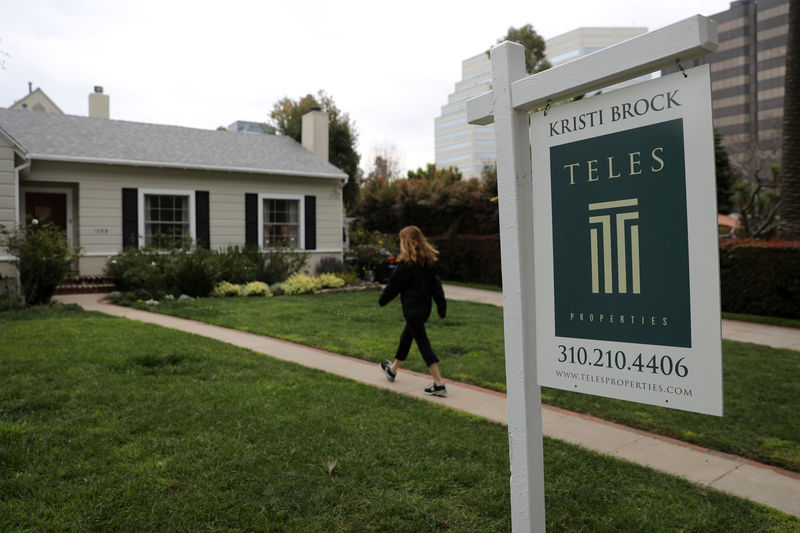 WASHINGTON (Reuters) – – U.S. homebuilding fell for a second straight month in June and permits dropped to a two-year low, suggesting the housing market continued to struggle despite lower mortgage rates.

Housing starts decreased 0.9% to a seasonally adjusted annual rate of 1.253 million units last month as a rebound in the construction of single-family housing units was offset by a plunge in multi-family homebuilding, the Commerce Department said on Wednesday.

Data for May was revised slightly down to show homebuilding falling to a pace of 1.265 million units, instead of slipping to a rate of 1.269 million units as previously reported.

Economists polled by Reuters had forecast housing starts dipping to a pace of 1.261 million units in June.

Single-family homebuilding, which accounts for the largest share of the housing market, increased 3.5% to a rate of 847,000 units in June, partially recouping some of May’s sharp drop. Single-family housing starts fell in the Northeast, but rose in the Midwest, West and South.

Building permits tumbled 6.1% to a rate of 1.220 million units in June, the lowest level since May 2017. Permits have been weak this year, with much of the decline concentrated in the single-family housing segment.

The housing market hit a soft patch last year and has been a drag on economic growth for five straight quarters. It likely subtracted from GDP in the second quarter.

The sector is being hamstrung by land and labor shortages, which are making it difficult for builders to fully take advantage of lower borrowing costs and construct more affordable housing units. As a result, the housing market continues to struggle with tight inventory, leading to sluggish sales growth.

The 30-year fixed mortgage rate has dropped to about 3.75% from a peak of 4.94% in November, according to data from mortgage finance agency Freddie Mac. Further declines are likely as the Federal Reserve has signaled it would cut interest rates this month for the first time in a decade.

A survey on Tuesday showed confidence among homebuilders increased in July. Builders, however, complained “they continue to grapple with labor shortages, a dearth of buildable lots and rising construction costs that are making it increasingly challenging to build homes at affordable price points relative to buyer incomes.”

Permits to build single-family homes rose 0.4% to a rate of 813,000 units in June. Despite the increase last month, permits continue to lag housing starts, which suggests single-family homebuilding could remain sluggish.