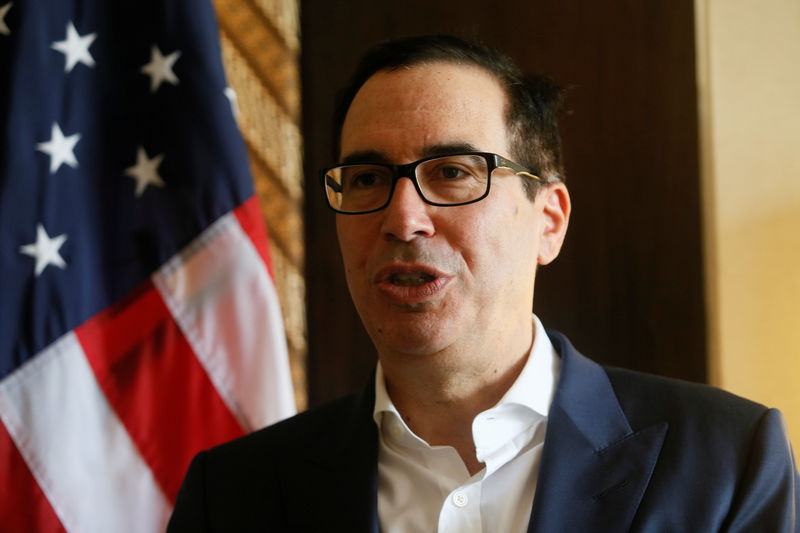 (Bloomberg) — Foreign-exchange strategists say the risk of a U.S. move to weaken the dollar has risen after Treasury Secretary Steven Mnuchin said there’s no change in the nation’s currency policy “as of now.”

“This is something we could consider in the future but as of now there’s no change to the dollar policy,” he said in an interview Thursday following a Group-of-Seven finance ministers’ meeting in Chantilly, France.

In the eyes of Shaun Osborne at Scotiabank and Juan Prada at Barclays (LON:), the remarks left the door open to action in the foreign-exchange market. The possibility has drawn the attention of Wall Street analysts as President Donald Trump has intensified his criticism of the Fed and other countries’ currency practices. He hinted at intervention in a tweet July 3, saying Europe and China are playing a “big currency manipulation game,” and said the U.S. should “MATCH, or continue being the dummies.”

“FX intervention risk was lifted another notch” by the Mnuchin comments, said Osborne, chief foreign-exchange strategist at Scotiabank. “The dollar is clearly on the White House radar and slower U.S. growth, no progress on trade into 2020 could prompt a more explicit U.S. split” from the consensus among its international peers not to intervene in FX, he said.

The U.S. hasn’t acted to forcibly weaken the dollar since 2000. For Bank of America Corp (NYSE:)., ditching the strong dollar policy would be more effective than intervention. The phrase was introduced under then-Treasury Secretary Robert Rubin in 1995 as a way to lift international demand for American debt by committing not to devalue the greenback.

Mnuchin, when asked during a press briefing if he believes that a strong dollar is in the nation’s best interest, said: “I’m not going to make any specific comments on the dollar policy or the euro-dollar policy.”

Here’s what currency strategists have to say after the remarks, with the dollar not far from its strongest since 2002 as measured by a Fed trade-weighted measure:

That’s not to say strategists expect U.S. intervention would produce the intended result.

Pound Falls to Two-Month Low on Risk of a Second U.K. Lockdown By Bloomberg