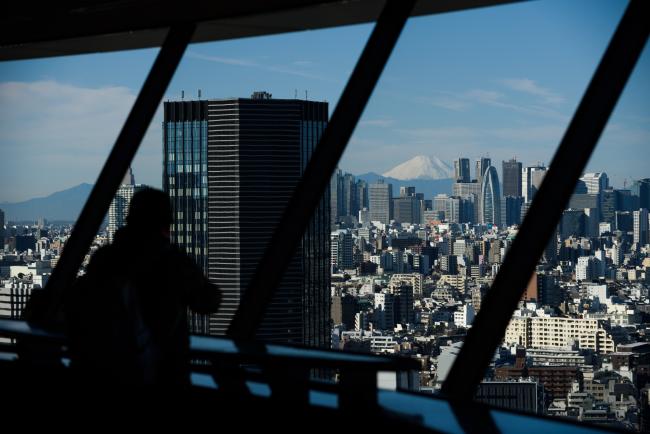 © Bloomberg. Mount Fuji stands beyond buildings as a visitor looks out at the skyline from an observation deck in Tokyo, Japan, on Friday, Jan. 11, 2019.

(Bloomberg) — China may be reluctant to commit to a deal with the U.S. that limits its flexibility on foreign-exchange rates if officials in Beijing draw lessons from previous trade clashes between America and Japan.

That’s the view of Deutsche Bank AG (DE:) strategists Oliver Harvey and Shreyas Gopal, who wrote that U.S. pressure on its biggest economic rival in the early 1990s appears to have at least indirectly contributed to an inadequate policy response from the Japanese authorities. That led to an unwanted appreciation of the yen and protracted deflation, they wrote in a note Monday.

“China appears to have learnt from Japan’s mistakes,” the strategists wrote. “Benefits for China to mirror the Japan experience and maintain a strong exchange rate may be lower than some argue.”

China’s trade imbalances, as was the case with Japan’s several decades ago, ultimately stem from a high domestic savings-rate that creates a current-account surplus in the absence of policy stimulus, according to the report. And like Japan, China faces a choice between reflationary exchange-rate depreciation or deflationary import contraction. Having seen how things turned out for Japan, though, Chinese officials may be more inclined toward an outcome that weakens the renminbi.

“Further escalation of trade tensions with the U.S. may lead to a significant further depreciation in the yuan, ” Harvey and Gopal wrote.

The has fallen about 2.4% this month amid escalating trade tensions between Washington and Beijing, with the currency slipping to its weakest level this year on Tuesday. Both sides have increased tariffs, and speculation has mounted about what other weapons could be brought to bear in the dispute — from currency markets and agricultural imports to China’s immense hoard of Treasuries.

“In order to continue on its route to becoming the preeminent global economic power, which some academics suggest is a key goal of Chinese policy, it will have to avoid the deflation trap,” the Deutsche Bank strategists wrote. “While many have assumed a trade agreement between the U.S. and China would be in each other’s mutual self interest, for some in China this may not be the case.”