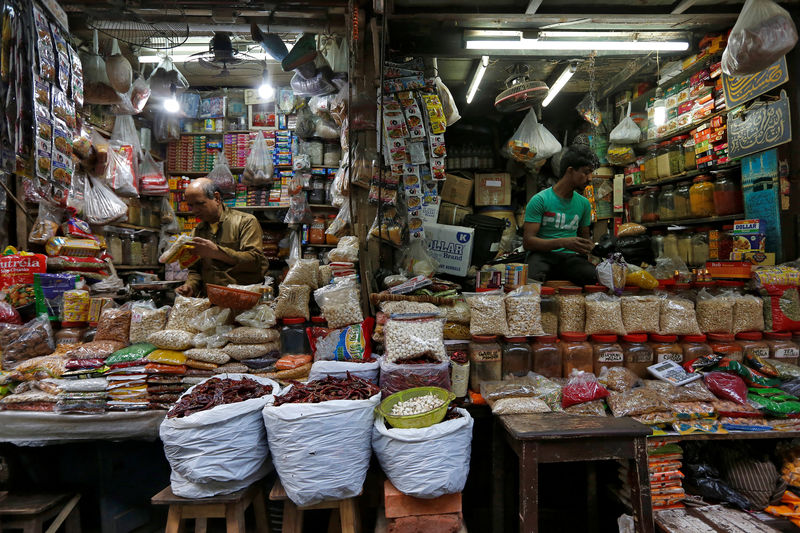 © Reuters. Vendors wait for customers at their respective shops at a retail market in Kolkata

NEW DELHI (Reuters) – India’s retail inflation rate hit a six-month high in April, due to bigger increases in food prices, but remained below the central bank’s target for a ninth month, keeping hopes alive for a June cut in the key interest rate.

A Reuters poll had predicted an April retail inflation rate of 2.97%.

The inflation rate has fallen sharply from a peak of more than 12% in November 2013, which Prime Minister Narendra Modi has touted while seeking a second term in general elections that began on April 11. Votes will be counted on May 23.

The economy likely grew an annual 6.5% in January-March, according to government estimates, slower than five-quarter low growth of 6.6% in October-December.

This year, the monetary policy committee of Reserve Bank of India (RBI) has cut its benchmark repo rate

“A significant deceleration in inflation for clothing and footwear and miscellaneous components has reduced core inflation from 5.06% in March to 4.57% in April. This reflects severe demand slowdown,” said Rupa Rege Nitsure, chief economist at L&T Financial Holdings.

She said the contraction of industrial output has opened up space for monetary easing in June.

The central bank has lowered its retail inflation forecast to 3.8% by January-March 2020, but warned it could be higher if food and fuel prices rise abruptly, or if the fiscal deficit overshoots targets.

Economists said inflation could pick up in coming months as manufacturers’ spare capacity was at its tightest in over seven years and any shortfall in June-September rains could trigger a spike in food prices.

Core consumer inflation, which strips out food and fuel prices, was estimated at 4.53%-4.57% in April, lower than March’s 5.02%-5.08%, according to two analysts after seeing the inflation figures released on Monday.

Retail fuel prices could also increase after the elections as state-run oil companies have largely held back from passing on the rise in global crude prices to consumers during the campaign. India meets 80 percent of its fuel needs through imports.

Prices of , India’s biggest import item, have gone up over 30% this year to around $71 a barrel. Retail petrol and diesel prices in Delhi this year have gone up about 6%.