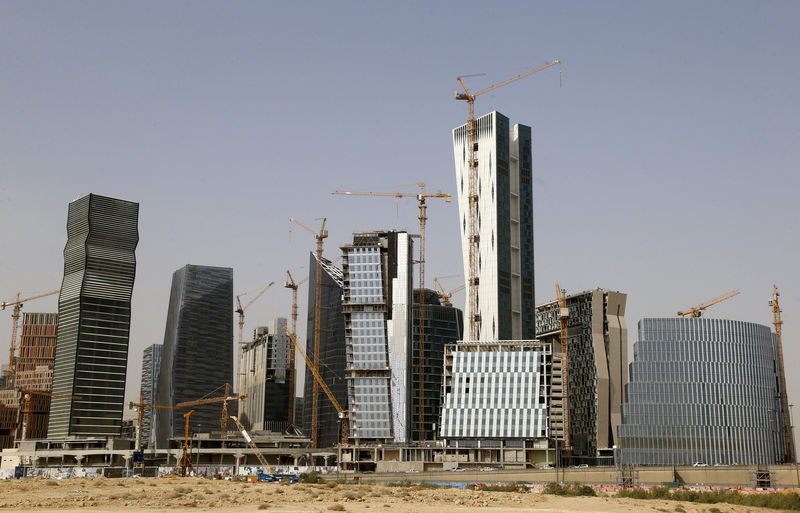 © Reuters. View shows the construction of the King Abdullah Financial District, in Riyadh

Its forecast is well above the government’s forecast.

The IMF’s projection is based on an assumption that Saudi oil output will average 10.2 million barrels a day and oil prices will average $65.5 a barrel in 2019, it said in a statement after a staff visit to the kingdom.

The IMF said the introduction of a value-added tax has been very successful, but the Saudi government should consider raising the rate from 5%, which is low by global standards, in consultation with other Gulf governments.

A reduction in the government wage bill, a more measured increase in capital spending, and the better targeting of social benefits will all yield fiscal savings, it said.

Last month Jihad Azour, director of the IMF’s Middle East and Central Asia Department, had told Reuters the budget deficit this year could be 7.9 percent, but also said that estimate was likely to be revised after the IMF delegation’s visit.

“Higher government spending has supported growth and the implementation of reforms, but has increased medium-term fiscal vulnerabilities,” the IMF said.

“Despite the budget surplus in the first quarter, the team projects that the fiscal deficit will rise to 7 percent of GDP in 2019.”

The IMF said real non-oil growth is expected to further strengthen to 2.9% in 2019, boosting overall economic growth to 1.9%, slightly higher than its earlier projection of 1.8%.

It said the increase in oil prices since the turn of the year is boosting confidence, but it was difficult to assess future developments in the oil market given uncertainties about production in some key exporting countries.

futures were trading at $71.60 a barrel on Wednesday.

Brazil to end 2020 with debt at 94% of GDP, treasury secretary says By Reuters