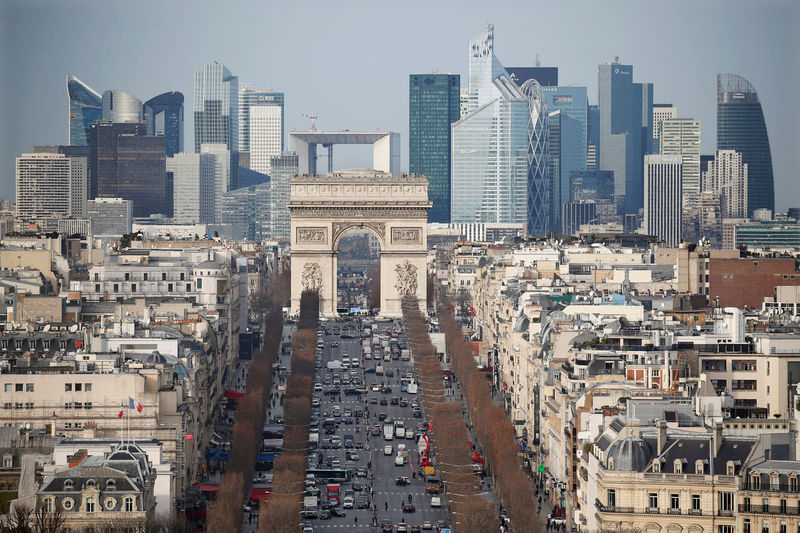 © Reuters. FILE PHOTO: General view of the skyline of La Defense business district with its Arche behind Paris’ landmark, the Arc de Triomphe and the Champs Elysees avenue in Paris

BRUSSELS (Reuters) – Euro zone industrial production fell in March for a second straight month as output declined in France and Italy but recovered in the bloc’s largest economy, Germany, data from the European Union’s statistics agency showed on Tuesday.

Eurostat said output in the 19 countries sharing the euro dropped by 0.3% on the month, in line with market expectations, and by 0.6% year-on-year.

The monthly fall in March followed a 0.1% decrease of the industrial production in February, which Eurostat revised upward from its previously estimate of a 0.2% drop.

The first quarter of the year, however, remained positive thanks to the 2.0% hike posted in January.

Output was driven down mostly by a 1.0% drop in non-durable consumer goods, such as food or toothpaste, as retail sales came to a halt in the bloc in March.

In a positive sign, production of durable consumer goods, such as cars or fridges, went up by 0.7% on the month, signaling managers’ expectations of a rebound in sales of more expensive items.

Germany’s first positive month in the year was not enough to offset marked falls of output in France and Italy, the bloc’s second and third largest economies, resulting in an overall negative reading for the euro zone.

But production declined by 1.0% in France and by 0.9% in Italy. The falls followed increases in the two previous months in both countries.